Continuing with our Irish Invasion, we move next to Sinead O’Connor.  She’s most famous for raising from the dead Prince’s bluesy love ballad, “Nothing Compares 2U,” and her no-holds-barred attack on the Roman Catholic Church. In college I fell in love with her voice, and her beauty – that bald head and those piercing eyes.  I bought her second album, “I Do Not Want What I Haven’t Got,” after my freshman year of college, and must have listened to it 1000 times in those three months I languished at home in my parent’s house, waiting until I was allowed back on campus. 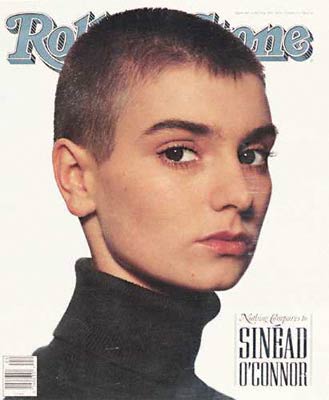 I have a hard time picking my favorite song from that album:  Black Boys on Mopeds, Emperor’s New Clothes, Three Babies.  But the song that always just tore my heart open was “Last Day of Our Acquaintance,” and the simple line “I know you don’t love me anymore.”  That’s it.  It was just so simple, and yet said so much:  Both a realization and an accusation, said with such aplomb – but just the smallest hint of longing.  Realizing someone doesn’t love you anymore is harsh in and of itself; but, perhaps, what is harder yet, is the process of accepting it.  She does that all in seven words.