From the news of the weird… and a little sad… we harken back to the golden days of the WB, circa 1997. 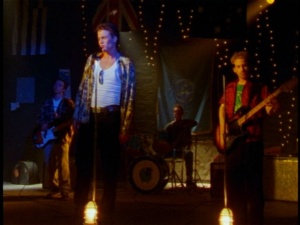 Actually we go back a bit before that:  In August, 1980, a grief stricken young mother, Lindy Chamberlain, made international headlines when she declared that dingoes (native wild dogs of Australia) made off with her daughter, Azaria Chamberlain.  Had we the interwebs then, her tearful claim, “Well the Dingoes got the baby” would have been viral in no time (checkout 2:55 in the video). Despite the mother’s grief, authorities were skeptical, claiming that dingoes were too small and not aggressive enough to carry off a 9-week old child.  After almost three years of investigation, Lindy, 8 months pregnant with her third child at the time, was sentenced to life in prison for murder, and her husband time-served as an accomplice.  The ruling literally tore Australia apart, some people aghast that a mother would come up with such a bizarre story, and others claiming that the story’s bizarre nature was proof enough of it’s truth.  Eventually, in 1986, a scrap of clothing belonging to baby Azaria was found near a dingo den; In 1987 Lindy was exonerated and freed; In 1988 Meryl Streep starred in a movie of the story.  But baby Azaria’s death was always listed as unknown.  Until today:  An Australian coroner finally declared that a dingo did steal baby Azaria, and killed her.

The true weirdness is how Lindy’s quote (or misquote, to be exact) became so famous.   Personally I was only 9 when baby Azaria died.  But thanks to the cult-favorite Buffy the Vampire Slayer, I was well versed in the story, thanks to Daniel “Oz” Osbourne, the part-time werewolf, part-time bassist, always cool Seth Green character.  “The Dingoes Ate my Baby” was the name of his amateur rock band that frequently played at The Bronze.  While I do not think the band’s name was ever explained on the show, I knew the reference.  Others probably know the phrase better from Season 3 of Seinfeld, when uttered by Elaine.  She used the phrase “maybe a dingo ate your baby” to mock a pretentious woman at a party.  It seemed there was no shame in mocking poor Lindy, or baby Azaria’s death.

Today Lindy Chamberlain and her divorced husband were handed a death certificate, which finally clears their names; but does little to bring back the daughter they lost, or the grief (and ridicule) they’ve suffered for over 30 years.