I was at a party last night, and we were talking about what is wasting our time on the interwebs.  Drunk History was the answer by many.

Drunk History?  To me the term conjured images of sitting through a course about famous drunk people.  Or famous people that had to be secretly drunk (or high) to literally say and do the stupid things they did.

But this was even better.  Continue through the series for stories on Tesla, and President Washington’s favorite slave.  It’s the passion (and drunkenness) of the story tellers that make is to enjoyable.  Oh, and Michael Cera with a cell phone as Alexander Hamilton.

Let’s go back to 1985.  Not because of the awesome music (although, has anyone else noticed that Lady Gaga sounds so much like Madonna?  But I digress).  We’re going back to 1985 for that cutting-edge technology.

You see, in the days when The Cosby Show and Miami Vice ruled the airwaves, the high techno geeks were in the laboratory playing with the genetics of computer databases and fiber optics.  And what was born was the ability to have a computer automatically dial random numbers from a database.  Never again would a family make it through Sunday night dinner without a telemarketer calling to sell them long-distance packages.  But something really useful did come from this – the CDC’s Behavioral Risk Factor Surveillance System, or the BRFSS.

Despite the James Bond sounding name, the BRFSS was simply a system to call random phone numbers in the US, and then ask adults to answer question about their behavior and health.  Created by the CDC, the BRFSS collected data not just on how healthy we were (“Have you been diagnosed with diabetes?) but also about your behaviors (“How often do you wear your seatbelt?”).  The idea was, in order to be a healthy person you actually had to behave like a healthy person.  All the wishing in the world would not keep you from getting heart disease: Eating a healthy diet and not smoking would, though.

The BRFSS also collected gender, height, weight, age, and of course, where you lived (according to area code, which in the early 1980s was tied to your actual location, not the address of where you bought your cell phone).  And with this information epidemiologists at the CDC started tracking BMI, or Body Mass Index.  I know what you are going say – everyone hates the BMI, and that it is a poor tool for determining if someone is too fat.  But the BMI does do something really well:  It gives the relationship between height and weight as a single number.  And given that the BRFSS surveys all 50 states, and US territories, it is powerful.  More than 150,000 adults are surveyed each month, and from it we can track BMI in the United States, going as far back as 1985.

So, how many people in the United States had a BMI of greater than 30 (which qualifies as obese) in 1985? 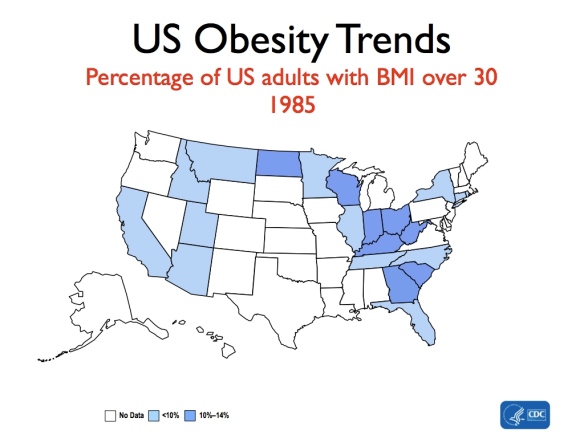 Only a handful of states did the BRFSS in 1985, but from the data we have, all looks pretty good.  Most states had obesity rates of less than 10%, and only eight had rates between 10-15%.  Awesome, as they would have said back then.

So what happened between then and now?

Times were still lean, so to speak, in 1990.  By then almost all the states are collecting data, and obesity rates in all states are less than 15%.  Lots of pretty, light blue.

But something really dramatic happened by 2000.  Now we have all 50 states collecting data, and there is a huge pocket in the central and southern US where 1 out of every 4 US adult is obese.   Line up all your friends, start counting them, and it would go like this:  “One.  Two.  Three.  OBESE.  Five.  Six.  Seven.  OBESE.”  Way to go Ohio, Texas, Indiana, Illinois, West Virginia, Tennessee, Georgia…….  And aside from Colorado (the only light blue state left), the rest of the states have obesity rates of 15 – 20%.

So what is the take home here?  Remember, the BMI has both height and weight in it.  So we could argue that only height is changing, and that is why the BMI is changing over time.  But since the BMI is your weight divided by your height-squared, that means the average height of all US adult has to shrink.  And we know that is not happening.